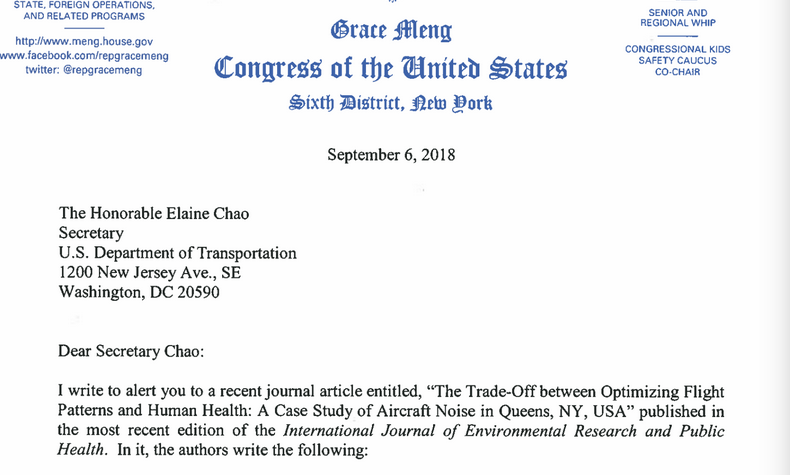 WASHINGTON, D.C. – In her continuing effort to combat aircraft noise over Queens and other impacted communities, U.S. Rep. Grace Meng (D-Queens) announced today that the House has passed her measure to authorize the Jet Noise Reduction Program, an initiative within the U.S. Navy’s Office of Naval Research.

The program seeks to reduce engine noise of high-performance military aircrafts, and breakthroughs that are made could possibly be applied to commercial jets, which would result in decreased airplane noise over communities such as Queens. In fact, Meng’s provision – which passed as an amendment to the National Defense Authorization Act (NDAA) – would direct the Secretary of the Navy to share relevant noise reduction discoveries with the civilian aviation community.

“The Jet Noise Reduction Program has the potential to be a critical component in mitigating excessive aircraft noise over communities like Queens,” said Rep. Meng, a founding member and former Co-Chair of the Congressional Quiet Skies Caucus. “That is why it’s important for Congress to authorize this initiative, and I’m pleased that the House has voted to do so. The U.S. military has made many significant breakthroughs over the years that have greatly benefitted our nation. Many of these advancements have been implemented for civilian use and the same can certainly be done for combating airplane noise. Excessive airplane noise remains a major issue that negatively impacts residents of our borough, and we must continue to take advantage of all opportunities – such as measures like this – that can help provide long-term solutions to the problem. I now call for the NDAA to be passed by the Senate with this specific provision included and I’m hopeful that this will happen.”

Those cosponsoring Meng’s provision include Reps. Joe Crowley (D-Queens/Bronx), Chairman of the House Democratic Caucus, Tom Suozzi (D-Queens/L.I.), Hakeem Jeffries (D-Brooklyn/Queens) and Kathleen Rice (D-Nassau County). All are also members of the Quiet Skies Caucus, of which Suozzi is the current Co-Chair.

“Authorizing the Jet Noise Reduction Program will ensure we can provide relief to the  thousands of families living in Queens and the Bronx that are burdened with excessive aircraft noise,” said Rep. Crowley. “This program is crucial to our efforts to reduce noise pollution in New York City. The U.S. military has always paved the way on technological breakthroughs in aviation, and I’m eager to work with our armed forces as they develop and deploy aircraft technologies that help combat the excessive noise that has plagued our communities.”

“Noise pollution has been a quality of life issue for the residents of Queens and Nassau Counties for way too long,” said Rep. Suozzi. “As Co-Chair of the Quiet Skies Caucus, I have made it a priority to ensure that excessive aircraft noise levels are reduced. The Jet Noise Reduction Program is an important first step in seeking a long-term solution to this problem.”

“This is a step in the right direction,” said Rep. Jeffries. “Deafening airplane noise that incessantly pollutes many neighborhoods in New York City is an unacceptable scourge that must be corrected. Congresswoman Meng and my colleagues in the New York delegation should commended for their stalwart vision and leadership in helping restore sanity and silence for our neighborhoods that have been forced to suffer through the scourge of blaring aircraft noise.”

“The American military has a long history of finding innovative solutions to difficult problems,” said Rep. Rice. “Our investment in the Jet Noise Reduction Program is an investment in the strength of our military, an investment in our national security, and ultimately I hope it will be an investment in improved quality of life for people in my district who have long lived with the consequences of excessive airplane noise.”

Meng originally secured the authorization of the Jet Noise Reduction Program in last year’s House-passed NDAA, but the measure was not included in the version passed by the Senate. She is hopeful that the provision will be in both versions this year.

The NDAA is the annual legislation that establishes funding levels and policies for the U.S. Department of Defense. The bill would take effect at the beginning of fiscal year 2018 which begins on October 1. 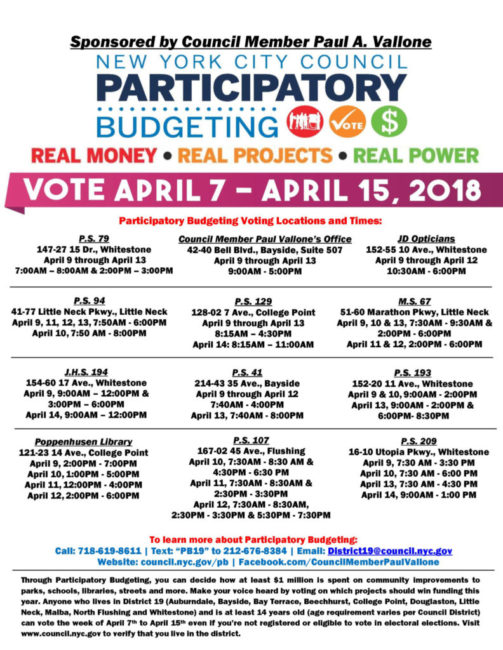 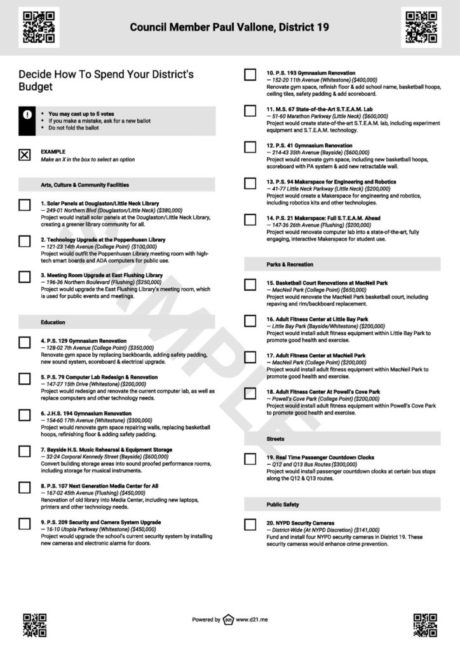 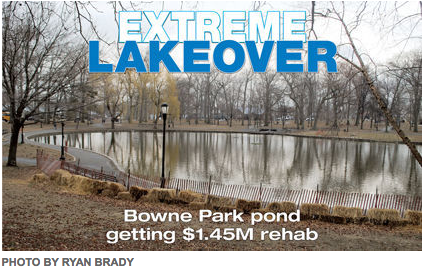 The lake at Bowne Park in Flushing is planned to receive a $1.45 million reconstruction project, with the Parks Department expecting it to be finished by late 2019. The plan features bioswale plantings around the pond and two new turtle islands along with other improvements, including a new filtration system. 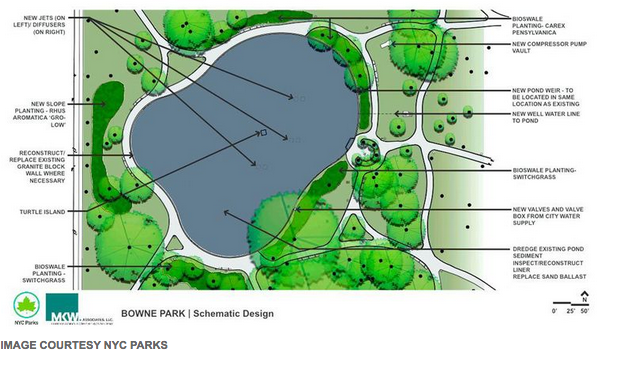